USA - America elects a new president, but what do new Americans like people from Antwerp (Belgium) who started a different life in the States years ago, think about that? For ten weeks journalist Niels Daniel and cameraman Nico Beckers travelled through four American states to find out: New Jersey, Colorado, Georgia and New York.

In 10 episodes on RTV, they present five Flemish people who have been living in the US for years and have a well-founded view on politics and the presidential elections.

The family of Marie-Astrid Baeyens wanted quality education for the children and opted for private education. An expensive choice, because in addition to the sky-high tuition fees, the family also pays the tax for public education.

Episode 2: Under the Boardwalk

Just 200 kilometres from New York is the second-largest gambling city in the US: Atlantic City. The casinos attract millions of tourists every year. But it soon turns out that not everything shines in the gambling city.

Kristel Deckx from Dessel has, like many Americans, two jobs. She works as a physiotherapist, started a successful restaurant with her husband and also runs a wine bar. Why all this business? Because it's so easy in the States.

Like the rest of America, Colorado, too, has been severely affected by the credit crisis. The Dutch real estate agent René Vellinga had a difficult time for several years. But he also witnessed how his clients had their difficulties.

Mariane Maes and her husband left their loss-making horticultural business in Belgium to start over in America. The family lives in a village in the middle of nowhere. Business is going so well now that they have 60 employees. Almost all Mexicans. Fortune seekers, just like them.

Is unhealthy food in America a cliché? Absolutely. But fast food and soft drinks remain incredibly popular. Mariane Maes and her husband don't get used to it. They drive many miles to get healthy food.

Episode 7: Your Own Personal Jesus

Frank Goeyvaerts was still a child when he moved to the States. He had a successful career at an oil company and is now retired. Frank is a convinced Republican. He's tired of paying for someone else's benefits.

Georgia, like many other American states, has a very liberal arms law. This also leads to strange situations. What to think about the village of Kennesaw, where every household is obliged to have a firearm in the house?

Episode 9: We Built This City

Lief Sannen has a successful dental practice in the heart of Manhattan. Without having to work hard she earns a lot. And that doesn't come as a surprise, because a visit to the dentist costs a fortune. Health insurances are very expensive in America, and on top of that the own contribution is a lot higher than in Belgium.

Episode 10: On Every Street

Nowhere in the US the crisis hit harder than in New York. Never before has the city counted more homeless people. Even people who used to have a decent job now often end up on the streets.

Niels Daniel (°1971) was the face of several sports shows on the Belgian television network RTV. In 2001 he started announcing at international sports events.​ 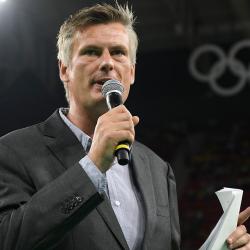 We hate each other more than the Jews

The hot revolt in Tehran

Between freedom and happiness