Paul-Joël Kamtchang is the Executive Secretary of ADISI-Cameroon, a civil society organisation that advocates for access to information and better data laws in Cameroon.

He is also the coordinator of an information access platform called DataCameroon (www.datacameroon.com), which provides citizens with verified data and fact checking. From 2014 to 2017, he was a researcher for Global Integrity, where he collected and analysed data for the integrity indices of fifty African states. A respected investigative journalist, he has lent his expertise to numerous projects using investigative journalism techniques to expose corruption, document hate speech, fact-check and track money laundering. He has also trained journalists in the use of data journalism during elections. In recognition of his expertise, the National Anti-Corruption Commission of Cameroon invited him to contribute to its 2013 annual report on the state of the fight against corruption in Cameroon.

Mr. Kamtchang has just completed a five-month fellowship at the National Endowment for Democracy (NED) Center for Democratic Studies. During his fellowship, Mr. Kamtchang analyzed how access to public information and data can be used to combat kleptocracy. His efforts are aimed at supporting the work of an emerging coalition of journalists and civil society organisations that are coordinating their efforts to expose kleptocracy in Central Africa. The main objectives of Paul-Joel's project were to begin writing the manuscript of a book on these topics, which he began to do during his fellowship. This will be his first individual book, after having participated in several collective books on governance and internet issues in Cameroon. 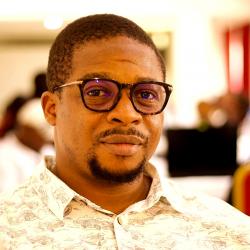