She studied political science with a focus in Latin America before completing her master's degree in journalism at Sciences Po Paris.

She worked as a freelance journalist for the Mexican media outlet Tercera Vía in the state of Guerrero in 2017. In 2018, she produced the documentary "Los niños lloran" about police violence against indigenous children in Araucanía. She joined Forbidden Stories for three years, a consortium of journalists that pursues the work of threatened reporters, in 2019. There, she coordinated and reported for the Green Blood Project, the Cartel Project, the Pegasus Project, etc. focusing on Latin America. Her articles have been published in Le Monde, Liberation, the Washington Post, The Guardian, Expresso, Die Zeit and others.

She was awarded in the category outstanding investigative reporting by Fetisov Journalism Awards in 2021 for an investigation on a the murdered mexican journalist Regina Martinez, among with other colleagues.

She is a finalist this year for the Premio Gabo 2022, for an investigation on the mining industry in Guatemala with two other colleagues. 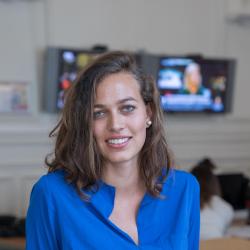 IXQUISIS - In Latin America, defending natural resources such as water is a deadly pursuit. According to the latest Global Witness report, 1.773 environmentalists were murdered in the last 10 years. Sebastián Alonzo, a 68 years old subsistence farmer from the Ixquisis micro-region in Guatemala, was murdered while demonstrating against the hydroelectric company that would divert the river and affect the crops which his family and community depended upon.