He works for the public broadcasting company ARD/NDR and especially for Panorama, the oldest investigative news show on German television.
He is co-founder and was until October 2019 editor-in-chief of Correctiv, the first non-profit investigative newsroom in Germany, and a former chairman of Netzwerk Recherche. Schröm authored 11 investigative books about terrorism and scandals in secret services, politics and healthcare. In his 38-year career as a journalist, he revealed spies, terror cells and neo-Nazi networks as well as betting fraud in professional soccer and a series of tax scandals in politics and economy. Among other things, 2014 he tracked down the Panama account of the treasurer of the German governing party CDU and former Finance Minister.

In 2010, Schröm established one of the first investigative unit in Germany for the weekly magazine Stern and was its head until his first change to Panorama in 2016.
In 2018, after joining Correctiv, he initiated and directed the “CumEx-Files”, a collaboration of 19 media in 12 European countries that uncovered the biggest tax fraud in European history. In connection with his revelations about CumEx fraud, Schröm was in the focus of public prosecutors in Germany and Switzerland. They accused him of economic espionage.
In 2021, together with Correctiv and Panorama, he initiated the research project “CumEx-Files II”, this time with media partners worldwide. 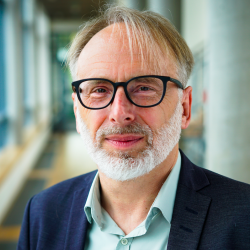