Katrin Lohmann is a German-born actress, audio maker and psychotherapist. She works within the performing arts, media and mental health care - with an eclectic passion for stories.

Katrin Lohmann was born and raised in Germany and has lived in the Netherlands since the age of 18, where she graduated as a drama therapist from HAN University of Applied Science in Nijmegen in 2003.

After a short stay in Spain she moved to Belgium in 2004 to study cabaret at the Herman Teirlinck Institute in Antwerp.

She obtained recognition as a psychotherapist and works in that capacity as a self-employed person on the psychiatric wing f of the Antwerp prison and in group practice Groenstraat.

She is also active in the professional stage and TV circuit. She has performed at NTG/Luk Perceval, Troubleyn/ Jan Fabre, Michael Rauter/Bob's Company, (Berlin), Theater Zuidpool, OneTrickPony/ Liesa Van der Aa and Muziektheater Transparant and within Flemish fiction such as Beau Sejour, Salamander and Callboys.

Katrin is also artistic and business leader of the socio-cultural organisation hell-er and is part of the podcast company Luyster.

For many years now, she has been making her own podcast series that is somewhere between docu and radio play: Radio Begijnenstraat, a poetic montage of life stories, text and music by and with prisoners. 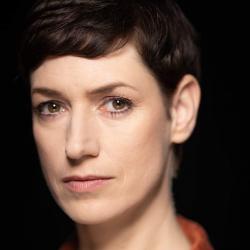 Locked up in lockdown

MERKSPLAS - March 2020. Corona shuts down Belgium. Everyone has to stay inside. Door closed, one hour a day outside. A story that sounds familiar to the residents of Merksplas prison.