Elien Spillebeen is a Belgian journalist and researcher. She studied international politics in Ghent (Belgium) and Aix-en-Province (France).

To complete her research for her master thesis Elien left for Eastern Congo for the first time in 2008. At her own initiative she returned several times to the region to spend more time with the women of this region. She wanted to understand the different aspects of a woman’s life in one of the most dangerous region to live as a woman. She gave herself the mission the create a balanced portret of women living in a conflict region. This resulted in the documentary Backup Butembo, a price winning documentary, but also led to the founding of the organisation Mama Kivu. The resilience of the women inspired her to get more involved herself. For this she received the awarded of Peace Woman in the Belgian Senate.

In 2017 she launched the project Beni Files, an online monument and documentary to give the victims of a series of massacres in Eastern Congo a human face. 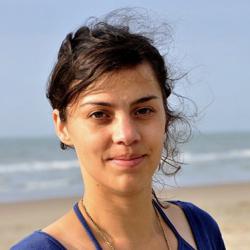 DR CONGO - This special documentary tells the story of exceptionally strong women in eastern Congo. The region has been the scene of a bloody conflict for over 15 years. Positive resistance is growing in the city of Butembo. The population is trying to regain control over its fate and life. When the violence in and around Butembo increases, the inhabitants are not watching from the sidelines. Sometimes they literally run into danger.

Since October 2014 more than 1000 citizens have been killed in and around Beni, a town in North Kivu in DR Congo. The web documentary Beni Files shows what is happening right under the nose of the world's most expensive UN peace mission.

KABUL, KINSHASHA, JUBA - No Olympics this summer. But Elien did seek and feel the Olympic spirit: in Afghan women's football, wheelchair basketball in South Sudan and with nzozo players in Congo. These champions wouldn't have made it to the Olympics anyway, but the Olympic spirit is clearly present.