Elfredah Kevin-Alerechi is a freelance multimedia investigative journalist from Nigeria, very passionate about environmental and climate justice. She is a fact-checker and a data journalist. A member of the Oxford Climate Journalism Network of the Reuters Institute of Journalism.

She is currently based in London, studying for her Master's programme at the University of Westminster.

Elfredah has spearheaded and led several investigations on environmental and climate issues in West Africa. Her work has been supported by reputable global media organisations such as the Pulitzer Centre, Civil Forum for Asset Recovery, Earth Journalism Network, Code for Africa, and The International Centre for Journalists, including several grants from the Journalismfund.eu.

In 2019, she covered United Nations Climate Change Conference (COP26) in Glasgow, Scotland with support from the US-based Stanley Centre for Peace and Security. She is enthusiastic about telling issues that affect everyday Nigerians’ lives, and her work has been featured in publications such as The Ferret-Scottish-based media, Scotsman, Al Jazeera, DeSmog UK, Earth Journalism Network, Newswire Nigeria and others.

Her special Skills include using OSINT to investigate issues, fact-checking, data Scrapper and Visualization, and conducting Forensic Analysis of websites and documents. 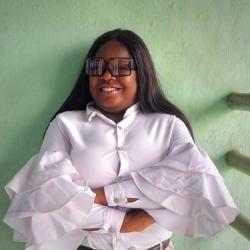 ACCRA, ABUJA - This story puts the spotlight on a clandestine network of gunsmiths and arms traffickers operating in West Africa in contravention of local laws. It shows how these gunsmiths and traffickers exploit the porous borders across the West Africa and Sahel region to traffic illicit small arms and light weapons, which continues to fuel conflicts across the region.

OYO - The Danish government's Danida Market Development Partnerships (DMDP) disbursed DKK 9 million to its Canadian partner Mennonite Economic Development Association (MEDA) in 2019 for a 4-year project to support Nigerian women shea collectors, but the project was terminated before the predetermined four years. The team looked into the project's effects and the reasons behind its abrupt termination in 2020.

Second-hand clothes from UK causing pollution in Nigeria and Ghana

ABUJA- This story demonstrates that although it is illegal to import used clothes into Nigeria, UK exporters continue to contravene the law by doing the contrary which is now polluting the country's ecology. It demonstrates how UK exporters provided Nigerian vendors with low-quality, deteriorating clothing, forcing them to burn unsold items in public.

ACCRA, ABUJA – This investigation exposes a hidden network of Chinese control and ownership of many industrial fishing vessels operating in Ghanaian and Nigerian waters in contravention of local laws.