André is Brazilian visual storyteller and journalist currently based in Portugal.

His work focuses on the relationship between humans and the natural world at a time in which their harmonious coexistence is crucial for the future of both.

André has been awarded by the World Press Photo, finalist at the Conrado Wessel awards, he is also recipient of grants from the Pulitzer Center, Journalismfund.eu, the IPRN Foundation and VG Bild-Kunst. His work was exhibited in group shows in Belgium, Hungary, Japan, France, Finland, Peru, Paraguay, Bolivia, Argentina, Chile, Uruguay, Puerto Rico, and Mexico. It is also part of the collection of the Instituto Moreira Salles, in Brazil, the Kiyosato Museum of Photographic Arts, in Japan and the Ruhr Museum, in Germany. 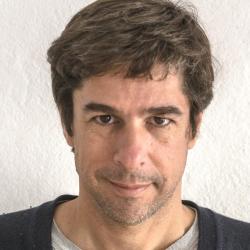 The dam and the drought

ALENTEJO - It hasn't been this dry in Portugal for a thousand years. But in the Alentejo, there have long been debates about the right way to farm in times of drought and record temperatures. This is mainly due to a dam that is supposed to provide sufficient water.