Factcheck.Vlaanderen is an online platform that uses artificial intelligence to detect disinformation and polarisation so that fact-checkers can verify and combat it.

The Flemish Journalism Fund (FJF) was the innovation incubator of Journalismfund.eu, supported by the government of Flanders (the northern, Dutch speaking part of Belgium). Throughout 2019 and 2020 the FJF supported 11 projects that innovated and diversified journalism in Flanders. This is one of them.

The proof-of-concept, which was supported by the FJF, aimed to investigate whether these objectives could be achieved through a cost-effective pipeline that combines artificial intelligence (AI) and the work of a team of journalism students led by a skeleton crew of experienced journalists.

This fact-checking platform is different from other fact-checking initiatives in that it combines artificial intelligence (AI) with the works of journalism students.

Textgain, the coordinator of the project, has developed techniques to automatically analyse texts and applies its self-learning technology to detect sources of disinformation and polarization. These can be news items spread on Twitter, forum threads or frequently viewed web pages. Through AI, questionable messages are “harvested” and placed in a pool for fact-checking.

The fact-checking itself remains a job for humans. The fact-checking staff consists of journalism students or alumni from the Erasmus University College in Brussels and the KU Leuven in Antwerp. They all have experience in fact-checking and work under the supervision of two experienced journalists from news agency Belga and public broadcaster VRT NWS. And last but not least, Tree Company was able to bring an aspect of civic participation to the set-up via a module that allows concerned citizens to request fact-checking themselves.

During the start-up phase, which was supported by the FJF, Factcheck.Vlaanderen published 60 fact-checks on a variety of subjects, such as politics, health, migration, climate, media, society, etc.

Led by experienced journalists, the student fact-checkers were able to use this project as a springboard into the world of journalism.

Thanks to machine learning, the algorithms were able to significantly reduce the incoming data flow. For news items, the reading work for editors was reduced by 69%. For polarizing messages, the data stream was reduced by as much as 78% without loss of information.

The Tooties are virtual cartoon characters that respond to disinformation and polarization on social media in an accessible way.

These fictional characters reply to disinformation and polarizing messages via verified social media accounts. They do not take a position, and their responses are relativizing and humorous. They don’t understand swear words and never attack anyone. They refer to other reliable sources without entering into discussion themselves.

In this way, disinformation and polarization are tackled directly at the source, and not just on a separate fact-checking platform.

The Tooties responded more than 730 times on social media.

In their own words

Factcheck.Vlaanderen explains the project in its own words:

What exactly did this project involve?

Factcheck.Vlaanderen is the first structural fact-checking platform in Flanders. In this project, an editorial team of veteran and student journalists searched the internet for disinformation and polarizing material and worked to counter it through thorough fact-checking and accessible counter-narratives. In the background, artificial intelligence observed how the editors worked and learned to automate parts of this process.

What about the project are you the most satisfied with?

We were able to create an extensive infrastructure in a short period of time that combined a wide range of skills: journalism, artificial intelligence and civic participation all came together in this project in an innovative way. This project gave us the space to try new methods, fail where necessary and continue where we could.

What went less smoothly than expected, or what could you have done differently?

In this project, we worked with a large, fast-rotating team of editors. This improved the diversity of the reporting but sometimes made it difficult to respond to certain items quickly. In the future, we would like to work with a smaller team that can respond faster to online disinformation and polarization. We also want to focus more on (viral) marketing and increase the reach of our fact-checks.

What is the impact of this project now that the subsidy period has ended? Will it continue to exist, or has it contributed or changed anything in your company or organisation?

Factcheck.Vlaanderen receives ongoing support from its enthusiastic partners. The part of the project supported by the FJF came to an end in September 2019, but a motivated skeleton crew of fact-checkers and data scientists continues to work actively on the project. We are currently preparing an application for IFCN certification and looking for funds to accelerate the project.

What do you think is the most important thing we can learn from this project for journalism in Flanders?

Disinformation and misinformation are a growing problem in Flanders, but those of us working in the journalism sector are not discouraged. In addition to Factcheck.Vlaanderen, there are other motivated fact-checkers active in our region. These groups are increasingly joining forces so that they can react to fake news more quickly. For the time being, the fall-out of the problem on social media remains underexposed: there are too few initiatives working to efficiently counteract the growing presence of polarizing information. Factcheck.Vlaanderen is trying to fill in this gap. 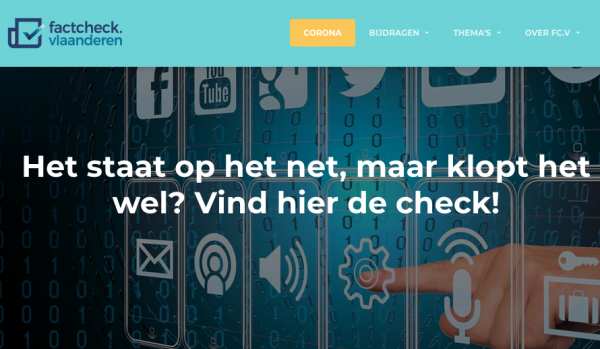